Gloucestershire choir bring music to the masses with virtual performances 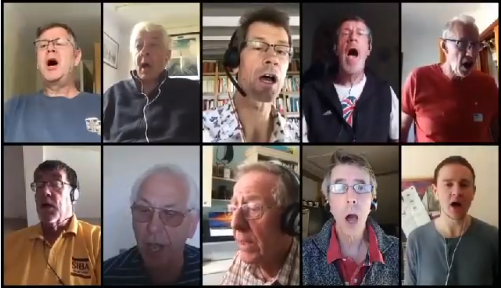 Many local clubs and societies have had to put their activities on hold for the time being, but a Gloucestershire choir have been using lockdown to bring music to the masses.

Dursley Male Voice Choir have been recording performances virtually, and posting them online to bring a smile to those throughout the community.

So far they have joined together to create two performances which they have posted on Facebook and YouTube. The first was a rendition of ‘Bright Eyes’ by American singer Art Garfunkel, followed by ‘Over the Rainbow’, an adaptation of the famous song from ‘The Wizard of Oz’, as a tribute to the NHS.

The two videos have been a big success and have got a very positive response from the public. Choir member Terry Murphy explains: “As the Dursley Male Voice Choir Facebook page manager, I have seen what a tremendous response we have had, not only from our usual followers but from literally tens of thousands of others who have listened and enjoyed our music and made very generous compliments. Each song has been seen by 12k+ people with many hundreds of shares. Our website has also received many more hits. It’s a fantastic publicity coup.”

This has all been organised by Deputy Musical Director Matt Sharp. The performances have also been arranged by Barrie Cooper and professionally mixed by Duncan McDonald.

The choir have also been joining together for virtual rehearsals every Wednesday night, to replace their usual practises. At their usual practise time of 7pm, the musical accompaniment along with the track for each individual section of the choir is posted on their Whatsapp group and each choir member has to select the recording for their section of the choir and sing along. The performances for social media work in a similar way, only this time each choir member records themselves singing along.

Matt Sharp believes rehearsing virtually has been positive for choir members and has allowed them to prepare for their next concert. Matt Sharp said: “Singing is an important part of all of our lives and Wednesdays simply wouldn’t be the same without choir. It has served brilliantly as a method of keeping things moving forward and once the lockdown is over we will be in a good position to prepare for our next concert.”

Some choir members however have found that rehearsing and doing performances virtually is very different from doing it in person. Terry Murphy explains: “The first thing you realise when singing in the virtual world is that you are alone. You cannot rely on your section colleagues standing around you to prompt you with the starting notes and/or the first word of the next phrase. You have to know it all yourself and well, if you are to stay in tune and not let down your section or the choir as a whole.”

Choir member Graeme Cook feels that the choir’s Whatsapp group has been very positive for the choir. He explains: I feel that the WhatsApp group has a great benefit to the choir – we feel to a certain extent that we are keeping going, adapting and overcoming. We are able to feel some level of choice and control – so this benefits both the collective and the individual.”

He also believes the whole experience has been beneficial to the community and the choir members. He said: “We are pleased to have had the opportunity to do something like this which shows the positive effects of singing on us and our community. I also know that many of us have found the experience personally very helpful in keeping some level of routine, contact and mutual support.”

The choir’s next online performance will be coming soon, where they will be singing the song ‘Anthem’ from the musical, ‘Chess’.

Whilst the choir were very disappointed to have to cancel their annual performance which was set to take place last weekend, they are very much hoping that their Christmas concert will be able to go ahead. If you like what you’ve heard, hopefully you’ll be able to catch them on December 11-12th at the Chantry Centre in Dursley.