Normal People Synopsis and Review: I watched it so you don’t have to 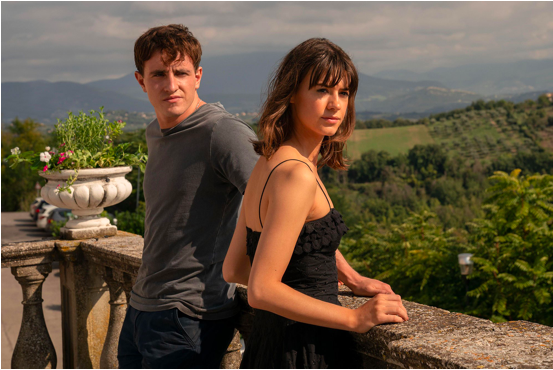 The new series based off Sally Rooney’s novel has been a massive hit amongst fans of the book and introducing the rest of us to a tale of a young couples’ love story.

But why has the Irish author’s characters been such a hit amongst viewers?

People have fallen in love with the young yet troubling romance as the story begins with the characters at school.

Lead characters Marianne, played by Daisy Edgar-Jones and Connell, played by Paul Mescal live parallel lives in a small town in rural Ireland. Whilst Connell is a favourite amongst school friends, Marianne is deemed a loner – yet both are intellectually smart. We discover their secret friendship as Connell’s mother works in the house of Mariannes’ showing us the class divide that affects their relationship in years to come.

A romance blossoms as they both admit their feelings whilst Connell waits for this mum to finish work at Marianne’s house. The two begin a secret relationship which becomes more than just physical attraction as the two seemingly mismatched pair connect on an intense level of understanding. As the two reach the end of school, Marianne encourages Connell to strive for more, guiding him on a career path to pursue writing. Connell is a prison to his own demise; underestimating what he can achieve. Marianne pushes him to apply to a well known university. However, as the year comes to an end the couples polar school status’s affects the relationship, as Connell goes to prom with someone else. Heartbroken by his actions, Marianne ends the relationship.

Skip forward to university and the tables have turned. Both attending the same university yet living different lives. Marianne has blossomed into a young attractive popular woman. Now moved on from Connell, we see Marianne in a new relationship. Connell however has found it difficult to fit in at university, becoming some what of a loner. We see class still playing a massive role in the two’s lives as Connell struggles to fund university, living in a bed share. This compares to Marianne where she lives in her own home.

The two cross paths again as Connell’s course mate turns out to be Marianne’s new boyfriend. The two attempt to be friends but their past returns as the two can’t keep away from each other. Marianne eventually ends her relationship with her boyfriend and the two rekindle their secret relationship again. They both continue to excel in education as both win scholarships for the next year.

However, Connell begins to struggle with money as he loses his job. Unable to fund his accommodation for the summer, he considers moving back to his home town. Too ashamed to ask Marianne to stay with her, he visits her house to tell her he’s leaving and that they should see other people.

As a new semester begins, the two have entered new relationships. They drift a part but the two restart their friendship when Connell is caught in an attack and visits Marianne for help. The two realise that it was a misunderstanding which lead to their breakup but it’s a little too late.

Their friendship continues as Connell visits Marianne’s family summer home in Italy with his friend. The two join some of Marianne’s friends along with her new boyfriend Jamie. Tensions run high during Connell’s visit as the couple face some issues. Eventually Marianne ends the difficult relationship with Jamie and moves to Sweden to study abroad.

Whilst away studying, Marianne struggles with self love and begins an unhealthy relationship. Meanwhile, back at home Connell enters a new but already complicated relationship with Helen. The two attempt to keep contact during this time through emails, both expressing and understanding each others difficult thoughts and feelings.

Whilst Marianne is in Sweden, Connell is faced with a tragic event of his friends suicide. Marianne returns home for the funeral but is soon back in Sweden. During this time Connell struggles with depression. Marianne helps him through continuous videos calls and becomes his lifeline from abroad. Eventually Marianne ends her toxic relationship and returns back to Dublin.

The two reattempt to remain friends at they both return to their home town of Sligo. Whilst home, Marianne gets involved in a fight with her abusive brother. After an incident causing her needing to take a trip to the hospital, Marianne calls Connell to come and get her. Connell goes to pick up Marianne from her home and tells her brother Alan to stay away from her. Connell becomes very protective of Marianne and she moves in with him and his mum.

The two enter their final year at Trinity together, celebrating Christmas and New Years in their home town. But the couple once again faces issues in their relationship. Marianne is keen to stay in Dublin whilst Connell is offered a place on a writer’s program in New York. Not wanting to leave Marianne again, Connell doesn’t want to take the opportunity. As their university lives come to an end the series ends with the two sat in Marianne’s university home. All packed up the two discuss their futures’. Connell realises that he must go to New York, with the pair saddened by the fact that the relationship will most likely end again.

Due to the INSANE popularity of the series, talks are already in the process for a second series as fans of the couple want to see what’s next for them.

But what do I really think of the series, and does it deserve the hype?

I wouldn’t categorise it as a complete love story. I think it begins as lust and it’s not only until near the very end of the series where is becomes a love story. Connell realises he is in love with Marianne a lot sooner than her. She takes longer to understand her feelings and to accept them fully and doesn’t tell him she loves him till the very end.

Normal people is a modern Ross and Rachel moment. The will they, won’t they is shown in a more realistic way as the characters evolve as they get older and face new experiences. The story also acknowledges the difficulties life can bring and how they affect our current relationships not only with our spouses but also our friends.

This story places importance of understanding in a relationship, showing that love stems from sharing people’s deepest and most difficult thoughts and feelings. The characters can only do this with each other and no one else.

The series most definitely calls to the young adults as they face similar times. Fulfilling people’s fantasies of a ‘Friends’ moment but making it realistic, it’s a love story that people can relate to on some level. It’s the perfect marriage between two of the most popular love stories to date, that being Romeo & Juliet and Ross & Rachel.

I think the key aspect that made people fall in love with the series was the reality of it all. It wasn’t a happy ending that people may have wanted but a realistic one. It’s a believable love story with all its bumps and twists in the road that most couples have.